Dust off those moulds and get yourself down to Loyola, 7.30pm every Tuesday for pre-season training! Everyone is welcome!

This year’s annual general meeting will take place at Loyola on Tuesday 13th August at 8.30pm. Everyone is encouraged to get along and have your say in how our club is run.

Vets In The Goals Again

The vets played their 2nd game of the season on Sunday, against the same opposition as the previous week albeit in a different cup competition (The Old Boys Cup).  Despite some changes in personnel the result was pretty similar to the previous week with Ignatians romping to a 9-0 win. David O’Brien (4), Brendan Brien (3), Chris Moore and Dan Woolley were the goal scorers.

The vets had their first run out of the season on Sunday against Woodhousians in the Jack Perry Cup at Loyola. Barry Corbett, Dan Woolley and Richard Crilly all made their Vets XI debuts with Barry scoring 4 goals in the 11-2 win. Brendan Brien (3), Chris Moore (2), Dan Woolley and Tony Brady scored the other goals.

Annual Sub for this season are now due, please get in contact with your captain or our club captain to ensure subs are paid on time

The annual mass for deceased Old Ignatians will be held on Sunday 25th  November this year (note – a week later than normal).

The mass will be held in the school chapel at 11:00. Refreshments will be provided immediately after in the Old Ignatian Loyola clubhouse, opposite the school as usual. Please pass this notice on to anyone that you feel may be interested in attending.

If you would like us to remember members of the Ignatian community that have passed away this year, please let me have details and I will ensure that they are added to our intentions. This year, we will be specifically remembering:

Fantastic support from the club and wider community at Paul & Angela Coyle’s race night on Saturday. Over £18,000 has been raised on the night and via the sponsorship page for 2 great charities.

If you wanted to make a donation but haven’t yet, there is still time at :

As you may or not know, one of our players Paul Coyle and his wife Angela lost their baby daughter earlier this year. During Marley’s weeks with Paul and Angela they were supported by a number of amazing charities who helped them greatly during this difficult time. Paul and Angela have arranged a race night at the Old Ignatian’s Clubhouse on Saturday 20th October 2018 to raise funds for those charities. If you can attend, please do and try and get as many members, other halves, friends of members, etc. along too. All are very welcome and we hope to raise lots of money for this very worthy cause.. Jerry Brennan will be providing musical entertainment on the night too. Doors open at 7pm, first race is at 8pm.

As part of our 100 year anniversary the club has purchased new kits for all 7 sides with a special edition badge. Last Saturday saw their first run out in glorious conditions! 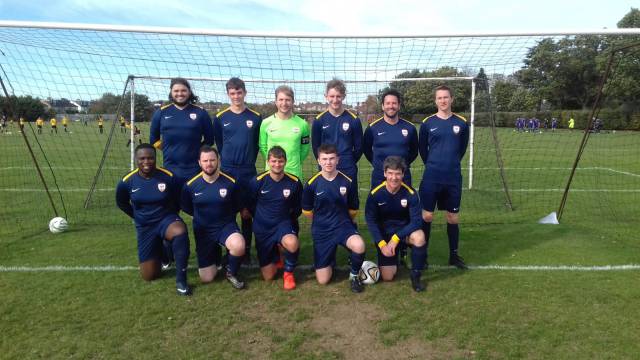